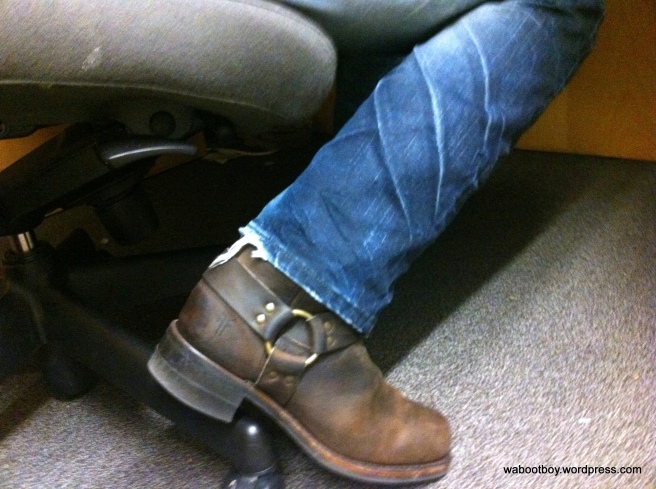 Fall is HERE and that means Boots Season is here. END_OF_DOCUMENT_TOKEN_TO_BE_REPLACED

I was surfing on the internet, and found out this teen TV series – Vampire Diaries. Both main male characters in the show wear some nice Frye boots. It is kind of funny because you rarely see both guys in a show wearing the same pair of boots! I personally like Paul Wesley’s boots better, maybe just because he is taller and he is more handsome than the other guy.

I really like this photo! Paul Wesley with his Frye distressed harness boots. Looks like he’s been wearing them a lot from looking at the sole. And this is not like a photo shoot for the tv series. He might be a bootman too! If you google his name, you probably see some nice boots photos that he featured in some fashion magazine!

END_OF_DOCUMENT_TOKEN_TO_BE_REPLACED

I was studying at Starbucks with Frye harness boots on! What a day! I saw two guys wearing boots too. One was a 40 years old guy with a leather vest and a pair of Black cowboy boots crossing legs right next to me. Totally an eye candy for me and kind of detractive. The other guy was wearing vintage slim blue jeans with harness boots on too, I guess they were made by Harley Davidson because of the big silver tab on the side of the boots.
I love my Frye harness boots, they are very comfortable! I have worn them for one year! I am getting a new pair because this is kind of small for my feet. They are size 8, I am saving money to get a pair of size 9.

As I promised that I will post pics of me wearing leather pants + hot boots, here they are. This is the first time I wear leather pants. The boots in the pics are Frye 12 inches Harness boots. I kind of like wearing leather pants. I like the way they cover my legs. Unfortunately, the buttons are broken and I can’t stand the vintage leather smell. I guess I will return them. But overall the leather pants are comfortable and a bit stretch which I did not expected. I might get a pair of these when I have enough money. Anyway, hope you like my pictures. I want to know which one is your favorite. Have a nice weekend.

END_OF_DOCUMENT_TOKEN_TO_BE_REPLACED

This is for Dan. He asked me to post more pics of my harness boots. And here they are. They look awesome! Hope you like them, Dan.